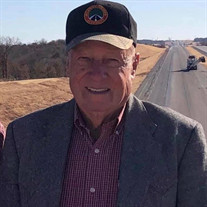 Cecil A. Davis of Calumet, OK was born on January 6th, 1938 in Comanche, OK and went to be with his Heavenly Father on January 7th, 2021. He was 83 years old. Cecil spent the early part of his life in the Cotton County area, graduating from Walters High School in 1956. In 1957 Cecil began his career with the (then) Oklahoma Department of Highways as a construction surveyor. This position led to his move to the El Reno area when construction began on Interstate 40 through the State of Oklahoma. Cecil led a crew that surveyed nearly every mile of I-40 from the Texas state line well into eastern Oklahoma. Eventually Cecil held many positions within the Department including Assistant Resident Engineer at the El Reno Residency, Resident Engineer at the Oklahoma City and Edmond Residencies, Assistant Division Engineer for Construction at Division 5 in Clinton, and finally Acting Division Engineer for Division 5 in Clinton at the time of his retirement in 1994. His 37-year career included work on most every mile of State Highway and Interstate in central and western Oklahoma. Cecil was awarded the Eddie B. Miles, Jr. award by the Oklahoma Department of Transportation in February 1993. It is the most esteemed honor given to a Department employee for exemplary characteristics including professional integrity, honesty, dependability, sincerity in helping others, and loyalty to the Department. Despite the many achievements during his career, Cecil’s biggest work accomplishment may have come after his retirement when an errant barge struck the I-40 bridge over the Arkansas River near Webbers Falls, OK, leading to the partial collapse of the structure and the closure of a critical component of the nation’s infrastructure. Director Gary Ridley summoned Cecil and two of his fellow retirees, W.T. Merrill and Pete Byers, to lead the effort to rebuild the damaged portion of the bridge. Utilizing the talented forces of both ODOT and their contracting partners, Cecil, W.T. and Pete, affectionately known as the “Space Cowboys,” oversaw work 24 hours per day, 7 days per week for the next month and a half. The bridge work was completed and I-40 traffic was restored in an amazing 46 days, unheard of in Oklahoma before or since. Cecil’s legacy extends well beyond his work career. In 1964 he married Doretta Ann (McCormack), beginning a union that would last 56 wonderful years and would include the raising of their six children. In 1969 Cecil and Ann moved the family to Calumet in order to give their kids an opportunity to grow up in a small town and participate in activities that they would not be able to otherwise. Cecil and Ann purchased a small two-bedroom house and remodeled it to accommodate the large family. The property contained just enough acreage so that they could engage in the many horse-riding activities that the family loved so much. The family was active in the El Reno Wranglers round-up club for many, many years, with Cecil serving as president for several of those. Cecil was also active in many civic activities throughout the years and volunteered his service wherever it happened to be needed in his community. He loved attending his children’s sporting events and kept going to basketball games long after his children had graduated from high school. It is estimated that Cecil and Ann have attended well over 1000 basketball games supporting the Calumet Chieftains, and they were recognized as the Calumet High School “Fans of the Year” for 2018-2019, something of which they were both very proud. Cecil enjoyed life. His many interests included his love of old country music (“the good stuff”, as he would say), carpentry, horse riding, raising cattle, western movies, attending auctions, classic cars (including his baby blue ’53 Ford) and, of course, spending time with his family, especially the grandkids. Cecil was preceded in death by his mother and step-father, Ella (Roby) and Oscar Courtney and his father, Andrew Cecil Davis. He is survived by his wife Ann of the home in Calumet, daughter Sherry Roach and husband Alan of El Reno, son Rick A. Davis and wife Vicki of Calumet, son Rick B. Davis and wife Robin of Yukon, daughter Ranae Maberry and husband Barry of Calumet, son Cecil Davis, Jr. and wife Kim of Yukon, son Shawn Davis and wife Tracy of Calumet, brother Sidney Davis of Stillwater, sisters-in-law Virginia McCormack of Calumet and Sara Rowekamp of Ohio, and finally, his proudest joys, 12 grandchildren, 10 great-grandchildren and 2 great-great grandchildren. Graveside services will be held on Thursday, January 14th, 2021 at 2:00 pm at the Calumet Cemetery, Calumet, OK. Viewing will be from 10:00 am to 8:00 pm on Wednesday, January 13th, at Wilson’s Funeral Home in El Reno, OK. In lieu of flowers the family requests that donations be made to the Calumet Volunteer Fire Department to support the important service they provide to our community. Donations may be sent or delivered to: Calumet Volunteer Fire Department c/o All Nations Bank PO Box 118 Calumet, OK 73014

Cecil A. Davis of Calumet, OK was born on January 6th, 1938 in Comanche, OK and went to be with his Heavenly Father on January 7th, 2021. He was 83 years old. Cecil spent the early part of his life in the Cotton County area, graduating from... View Obituary & Service Information

The family of Cecil Andrew Davis created this Life Tributes page to make it easy to share your memories.

Send flowers to the Davis family.