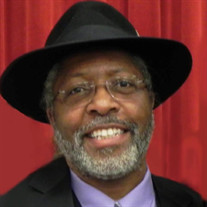 Ceadric LeVerne Washington was born June 26, 1954 in Orange, New Jersey. On June 6, 2021, at the age of 66, he passed away in Kingfisher, Oklahoma, surrounded by family. He was preceded in death in 2010 by his father, Walter Franklin Washington, and in 1998 by his first wife, Marilyn Barbour Washington. Ceadric is survived by his mother, Anita Delores (Wrice) Washington, 89, Charlottesville, Virginia; brother, Ronald Washington and wife, Jaqueline, and their three sons, Yancey Mills, Virginia; sister, Zelita Washington, Richmond, Virginia; brother, Randolph Washington, and two sons, Columbia, South Carolina; sister Gwynda Williams and husband, Amos, and their two sons, San Antonio, Texas; and sister Faith Terrell, Baltimore, Maryland. Ceadric is also survived by his wife of 27 years, Gail Christine Kuehn (Lemke), Kingfisher, Oklahoma, four children, three stepsons, and nine grandchildren. His children are Franklin Charlemagne Washington, Dillwyn, Virginia; Marvin Montague Washington and partner, Shana Inofuentes, Arlington, Virginia; Destiny Dawn Washington, Oklahoma City, Oklahoma; and Maximus Jabez Washington, Kingfisher, Oklahoma. His stepsons are Joshua Lee Kuehn, Kingfisher, Oklahoma; Levi William Kuehn, Kingfisher, Oklahoma; and Jacob Don Kuehn and wife, Elizabeth Diamond, Georgetown, Texas. His grandchildren are Tianna Renee Washington, Richmond, Virginia; Stephanie Lynn Rush, Gardener, Kansas; Joshua Rodney-Lee Kuehn, Kingfisher, Oklahoma; Amichai Alejandro Maciel, Arlington,Virginia; Katrina, Elizabeth, and Jessica Bean, Oklahoma City, Oklahoma; and Robert Scott Kuehn, Christopher James Diamond, and Emily Ann Diamond, Georgetown, Texas.. Ceadric was known to his family as “Butch,” but to those in Watonga, he was known as “The Liquor Store Man.” Ceadric owned and ran Watonga Liquor for 15 years. Ceadric got along with everybody, there was not a day when he was not smiling, and it was a magical one that would draw you in. His hugs were warm and firm. He was always there to talk with you, even if you had just met him. He would detain you with conversation for hours, just to get to know you. Ceadric always stayed optimistic and gave great advice, with a story to go with it. In 1963, along with his brother, Ronald, and sister, Zelita, Ceadric was one of the “Albemarle 26,” the first African-American students to desegregate Greenwood School in Albemarle County, Virginia. In 1972, Ceadric graduated from Lane High School in Charlottesville, Virginia. He later obtained an Associate’s Degree in Electrical Engineering from DeVry University in New Jersey. Throughout his life, Ceadric wore many proverbial hats. Growing up, he partook in many extracurricular activities, including track and field, football, wrestling, basketball, theatre, band, and choir. He played the piano, organ, drums, and sang. Active in the Charlottesville, Virginia community, in 1988 Ceadric ran for city mayor. He served as a 32nd degree, past Worshipful Master at Pride of Virginia 122 Charlottesville Masonic Lodge and was a long-time member and deacon of Piedmont Baptist Church in Yancey Mills, Virginia. Ceadric was also a police officer, bartender, night auditor, security guard, emergency room caretaker, electrician, engineer, and liquor store owner, but first, he was a dad. After his first wife became paralyzed in 1982, at the age of 28, Ceadric began taking care of her and their two young sons, ages four and two. He also literally loved his hats. Ceadric was rarely seen without a hat and was known for his characteristic, long locks of hair. Ceadric was open minded and always thought outside the box. A critical thinker, he approached issues analytically, rarely acting without deliberation. Ceadric had a love for traveling and learning about other cultures and religions. “You should learn something new everyday,” was wisdom he always expressed and by which he lived. He was very fond of Native American culture and had a connection with the Cheyenne and Arapaho community in Watonga. Ceadric loved sports and enjoyed watching the University of Oklahoma, University of Virginia, and the Green Bay Packers compete. His appreciation and gift of music always shined brightly; from rock and roll, to country, rap, screamo, electronic, jazz, classical, gospel, really anything you could think of he enjoyed, sang, and danced. Ceadric Washington has been a rock for many people. He was always tough, strong-willed, wise, a fighter, a warrior, and more. If you really knew him, you would understand that it is hard to write a short obituary for him. This could easily turn into a biography. His warm but strong embrace, contagious laugh, magical smile, and soul energy will be deeply missed, forever; for generations. In lieu of flowers, donations are welcome for the family at GoFund.Me/6f54a5f8 or a charity for equality, such as the NAACP Legal Defense Fund, Southern Poverty Law Center, or Black Lives Matter, in Ceadric LeVerne Washington’s name. A local service celebrating his life will be at 5pm on Friday, July 9th at First Baptist Church (301 N. Noble Ave. Watonga, OK). A service will also be at 1pm on July 31st at Piedmont Baptist Church (596 Half Mile Branch Rd, Crozet, VA 22932).

Ceadric LeVerne Washington was born June 26, 1954 in Orange, New Jersey. On June 6, 2021, at the age of 66, he passed away in Kingfisher, Oklahoma, surrounded by family. He was preceded in death in 2010 by his father, Walter Franklin Washington,... View Obituary & Service Information

The family of Ceadric LeVerne Washington created this Life Tributes page to make it easy to share your memories.

Send flowers to the Washington family.