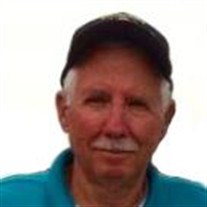 Burnie Andrew (Skip) Sanderson, Jr. went to be with his Lord, July 24, 2016 after a courageous battle with cancer. He was born, Oct. 2, 1947, in Oklahoma City to Burnie "Bud" Andrew Sanderson, Sr. and Mary (Whitaker) Sanderson. He graduated from Grant High school in 1965 and joined the Air Force shortly there after. He served his country at Udorn Royal Thai Air Force Base in Thailand during the Vietnam Conflict. He was awarded the Bronze Star, Vietnam Service Medal, and the Air Force Commendation Medal for meritorious service and devotion to duty; contributing immeasurably to the overall mission of the United States Air Force Security Police in Southeast Asia, and many other distinguished awards. On July 19, 1969, he married Barbara Henthorn and they were blessed with 4 children. She preceded him in death in 1992. Skip was employed at Gulfstream Aerospace (Aero Commander) from 1974 until the plant closing in 2002. He married Lue Ann (Clark) in 1996 and took her 2 children as his own. He lived for his family and loved them with all his heart. He was a true role-model as to what a husband, father, and grandfather should be. He spoiled his grandchildren and wanted to share in all their activities. He loved to fish with his buddies and spend time at the Lake house. Skip was a member of Sacred Heart Catholic Church in El Reno and was an active member of the Knights of Columbus, helping with their fund-raising activities. Those left to cherish his memory are wife, Lue Ann, of the home; children, Philip Sanderson and wife, Shelley, Melissa O'Neill and husband Mickey, Sherry Ekdahl, Ronda Moss, Chris Foutz, and daughter-in-law, Tanya Sanderson; his special grandchildren, Thomas Moser, Ethan and Riley Ekdahl, Ally and Chloe Sanderson, Lyndsie Elliott and husband, Brian, Justin Shrum, Dakota Moss and wife Molly; one precious great-granddaughter, Lily Grace Elliott; soon to arrive great-grandson, Bentley Andrew Moss; brothers, Don Sanderson and wife Pat, Ed Sanderson and wife Tina; sister, Kathy Coffelt; and many, many nieces and nephews whom he loved. Those predeceased in addition to his 1st wife are both parents, Burnie and Mary Sanderson; son, Roy Sanderson; and sisters, Linda Little and Phyllis Stevens. Funeral services will be held Thursday, July 28, 2016 at 10:30 AM at Sacred Heart Catholic Church with Father Mark Mason officiating. The family will receive guests on Wednesday, July 27, 2016 from 5:00pm to 7:00pm at Wilson Funeral Home in El Reno. Donations can be made to Sacred Heart Catholic School or the charity of your choice. Services are under the direction of Wilson Funeral Home.

Burnie Andrew (Skip) Sanderson, Jr. went to be with his Lord, July 24, 2016 after a courageous battle with cancer. He was born, Oct. 2, 1947, in Oklahoma City to Burnie "Bud" Andrew Sanderson, Sr. and Mary (Whitaker) Sanderson. He graduated... View Obituary & Service Information

The family of Burnie Andrew (Skip) Sanderson, Jr. created this Life Tributes page to make it easy to share your memories.

Burnie Andrew (Skip) Sanderson, Jr. went to be with his Lord,...

Send flowers to the Sanderson family.