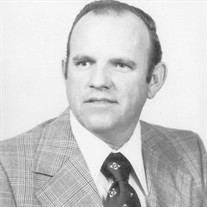 Funeral services for Bubby Gene Watts of El Reno will be held at 10 a.m. Saturday, Sept. 11 at First Pentecostal Church of God, with burial following in the El Reno Cemetery. Services are under the direction of Wilson Funeral Home. Mr. Watts passed away Sept. 7, 2021, at home with his loving family by his side. He was born Feb. 1, 1939, in El Reno. He married Doris Powell of El Reno, the love of his life, both of whom were inseparable, on Dec. 23, 1955. Gene was predeceased by his parents, Auther and Angie Francis (Howard) Watts; and eight siblings, brothers, Earl, Eddie (Mary), Emmet, Ernie, Edgar and Everett, and sisters, Elovie and Evelyn Mae Rush. Gene is survived by his wife of 65 years, Doris Jean; his three children, son, Danny (Vicki) Watts, daughter, Debbie Grantham, and son, Donnie (Lynn) Watts; five grandchildren, Brandon (Leslie) Watts, Tiffany Grantham, Kyra Watts, Kyle (Misty) Watts and Kailey (Shane) Smith; eight of his loving great-grandchildren, Madison (Blane) Warner, Megan Watts, Braxton Ward, Dylan, Ryder and Weston Watts and Kezzy and Liam Smith; and several nieces, nephews and extended family members and loved ones. Gene lost his father at the age of 4 and to help his mother, in 1954, he enlisted in the U.S. Navy at the young age of 15. He also served in the Oklahoma National Guard. He was a local truck driver up until he joined the El Reno Street Department in 1969. He worked his way to code enforcement to planning director to public works director to assistant city manager from 1971 to 1987, with a two-year stint as city manager in 1974/1975. He also was an elected city councilman. Gene was a member of the First Pentecostal Church of God and served as a deacon, music director and Sunday school superintendent. He also became an ordained minister with P.C.G. He was a member of the American Legion. While working his way up in city government, Gene also attended courses at the University of Oklahoma and also Oklahoma State University. He held several other titles and positions including secretary of El Reno Human Relations Commission; secretary of the El Reno Industrial Trust Foundation; committee member of A.C.O.G. - Transportation; and committee member of Infrastructure Advisory Task Force to the Governor of the State of Oklahoma. He also was instrumental in starting the El Reno Police Department Reserve Force in 1984, and was one of the first officers in the Reserve. After retirement, Gene and Doris took several trips throughout the U.S., visiting many sites and states and taking grandchildren on most all trips, but as he said, no more than two at a time, Doris. They loved camping and spending time with family. Gene was a very caring, loving and spiritual man who loved his Savior Jesus and is with him this very day in heaven. He will be greatly missed.

Funeral services for Bubby Gene Watts of El Reno will be held at 10 a.m. Saturday, Sept. 11 at First Pentecostal Church of God, with burial following in the El Reno Cemetery. Services are under the direction of Wilson Funeral Home. Mr. Watts... View Obituary & Service Information

The family of Bubby Gene Watts created this Life Tributes page to make it easy to share your memories.

Funeral services for Bubby Gene Watts of El Reno will be held...

Send flowers to the Watts family.