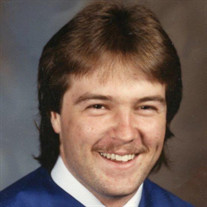 Brent Lee Sollars went to his heavenly home Sunday, April 3, 2022, at the age of 53. He was recovering from a recent open-heart surgery and was happy to be out of the hospital and back home. He loved life and was looking forward to more years. El Reno was his hometown and he was a 1987 graduate of El Reno High School. Brent liked classic cars, enjoyed watching comedies and was an OU Sooners fan. He had a positive attitude and a great sense of humor. He loved his family and was a good and loving son, brother, father and uncle. He became a Christian at a young age and he was a member of the First Baptist Church of El Reno. When he was a teenager, he enjoyed going to Falls Creek Church Camp. Brent’s favorite color was blue and he liked fried-onion burgers, chicken-fried steak with country gravy, but his favorite was his mom’s cooking. He was able to find something positive and humorous in situations when others missed it and he laughed often. He liked sunsets and enjoyed taking his dog to the dog park. Brent was the victim of a motorcycle-car wreck on Mother’s Day in 1990. He was the survivor of a severe traumatic brain injury caused by the wreck which he and his family dealt with for the rest of his life. The doctors said no one could survive those injuries, but with the power of prayer, faith, love and perseverance, Brent survived and relearned how to do the things that everyone else takes for granted every day. He endured a lot more than most people do in a whole lifetime. He was preceded in death by his father, Gary Sollars and his beloved grandparents, Hugh and Kathryn Willingham. Left behind to cherish his memory are his parents, Rita and Vernon Millspaugh, his sister, Sondra Sollars, his son, Austin Sollars, twin niece and nephew, Dakota Sollars and Jaxson Sollars and stepbrothers, Vernon Millspaugh II, Todd Millspaugh and Chad Millspaugh and many friends. The family requests donations in Brent’s name be made to the American Heart Association or the American Diabetes Association. A private family service is being planned. Arrangements are being made by Wilson Funeral Home. .

Brent Lee Sollars went to his heavenly home Sunday, April 3, 2022, at the age of 53. He was recovering from a recent open-heart surgery and was happy to be out of the hospital and back home. He loved life and was looking forward to more years. El... View Obituary & Service Information

The family of Brent Lee Sollars created this Life Tributes page to make it easy to share your memories.

Send flowers to the Sollars family.