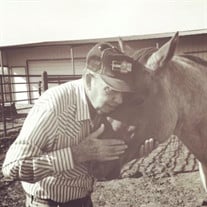 Billy Joe Webb was born May 15, 1935 in Union City, OK to James Andrew “Andy” Webb and Katherine “Katie” Murphy McIntyre Webb. He was the youngest of eight children, and raised on a farm. He was a graduate of Union City High School, class of 1953. After high school he attended college at Central State University in Edmond. He enlisted in the United States Army, and served for two years. On May 7, 1960 he married Janice Joan Williams, and they established their home in El Reno. They raised three children, Kellie, Marcy, and Joe, and were blessed with 51 years of marriage. He started his career with the Rock Island Railroad, and a short time later went to work at the El Reno Federal Reformatory. He was a correctional officer and was injured during the 1968 riot. After recovering from his injuries, he returned to the Railroad and had a forty-one year career as a locomotive engineer for the RIL and Union Pacific Railroads, retiring in 1999. In between his time with the RIL and UP railroads he owned and operated the Union City Dairy Mart and Fast Stop Convenience Store. He always had a love for farming and the land. He raised Limousin Cattle and Quarter Horses. He was a lifelong gardener and thoroughly enjoyed sharing his produce with family and friends. He had a servant’s heart and was an active member of Heaston Community Church. He was also the President of the National Association of Retired and Veteran Railway Employees (NARVRE). He loved spending time with his family (especially his grandkids and great grandkids), friends, church family, and horses. He entered heaven on March 28, 2022. He was preceded in death by his parents, his seven siblings, his wife Janice, and his son Joe. He is survived by his daughter Kellie Carel and her husband Randy, his daughter Marcy Bomhak and husband Terry, and his daughter-in-law Melissa Webb. He is also survived by his seven grandchildren, Juston Tech (and wife Kacie), Cody Bomhak (and wife Jenna), Nikki Henley (and husband Adam), Brandi Austin (and husband Matt), Matt Carel (and wife Keesha), Clint Webb, and Abigail Webb. He was also blessed with 12 great grandchildren, Rayna, Karl, Bryce, Bailey, Jace, Riley, Katy, Kash, Dylan, Brayden, Easton, and Leon, and numerous other relatives and friends. A funeral service to honor and celebrate the life of Billy J Webb will be held at 2:00 p.m., Thursday March 31, 2022 at the Heaston Church (7501 S Heaston Rd, El Reno, OK 73036) with burial to follow in the Union City Cemetery. Viewing will be held at the funeral home on Wednesday, March 30 from 12:00 p.m. - 8:00 p.m.

The family of Billy J Webb created this Life Tributes page to make it easy to share your memories.

Send flowers to the Webb family.