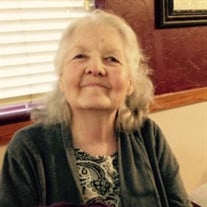 Betty Rae Allen, 89, of El Reno went to be with her Heavenly Father on March 5, 2022. Betty was born to Harold and Mamie Frances Wood on May 14, 1932, in Ninnekah, Oklahoma. She had one brother, Robert Harold Wood. She attended El Reno High School and Chickasha High School where she was elected the “Basketball Queen” her junior year. She met the love of her life, Archie “Pete” Allen in Chickasha, OK and they were married May 29, 1949. The date of their marriage was always a topic of discussion on their anniversary as Pete said they should celebrate on the 28th instead of the 29th of May because he said that is the day they really got married. They were married almost 60 years at the time of Pete’s death. He was her one and only (despite the fact they couldn’t agree on the date they were married and of course Mom was right). Betty and Pete had their two children, David, and Jeannie. They lived in Chickasha, OK, Denver, CO, and El Reno, OK, prior to moving back to Chickasha eventually. Betty was mostly a housewife and a mother while the kids were in grade school as Pete was a truck driver for most of his years and was gone from home a lot. As the children got older, she would work at Montgomery Ward, AT&T, and Hensley’s Restaurant. She started as a waitress, hostess/ cashier, and then became supervisor for many many years. That is where she got the nickname “Pretty Betty”. When she retired, she also found herself in the position of a caretaker. She is preceded in death by her husband; Archie (Pete) Allen, grandson; Daniel McLanahan, great-great grandson; baby boy Michael Eugene Conner IV, and her brother; Robert “Bob” Wood. She is survived by her son, David Allen of Chickasha, OK, her daughter, Jeannie Beaty of El Reno, OK. Grandchildren; Jeffrey Davis of El Reno, OK, Janae Collar and husband J.L. of Edmond, OK, Kelly Muller of Oklahoma City, OK, Annie McLanahan of Ft. Walton Beach, Fl, Dayna Reffner and husband Eric of Rapid City, SD. She is also survived by 9 great-grandchildren: Tori, Bethany, Jace, Jensen, Raven, Raine, Hannah, Corben, and Luke. Also 7 great-great-grandchildren, numerous nephews, nieces, and cousins. Family was everything to her, especially her grandchildren. There was absolutely nothing she wouldn’t do for them. The family would like to give a very special thanks to River Oaks nursing home and all of her caregivers for the special care and love she received from each and every one of them while she was there. She acquired her new nickname “Betty Boo” while there. Sometimes the only way to get her attention was to call her Betty Boo and then she would open her eyes and smile. Betty can be represented by 3 words: God, Family and Love. Come & Go visitation will be on Wednesday, March 9th from 12:00 PM to 8:00 PM at Wilson Funeral Home with family present from 5:00 PM to 7:00 PM. A funeral service will be held in the Wilson Funeral Home Chapel on Thursday, March 10 at 1:00 PM with burial to follow at the Ninnekah Cemetery in Ninnekah, Oklahoma.

Betty Rae Allen, 89, of El Reno went to be with her Heavenly Father on March 5, 2022. Betty was born to Harold and Mamie Frances Wood on May 14, 1932, in Ninnekah, Oklahoma. She had one brother, Robert Harold Wood. She attended El Reno High... View Obituary & Service Information

The family of Betty Rae Allen created this Life Tributes page to make it easy to share your memories.

Send flowers to the Allen family.