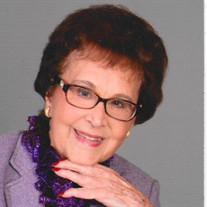 Bessie Louise Gilliam Jenkins passed from this life on January 20, 2022. She was born on September 11, 1933, in Bells, Texas, to William Neal Gilliam, a farmer, and Ola Mae Belsher Gilliam, a teacher. Growing up in rural Texas, Bess was encouraged by her mother to pursue her interest in teaching, telling her that next to the ministry, teaching was one of the highest “callings” one could have. After graduating from Bells High School in 1950, Bess attended Austin College in Sherman, Texas, where she met her future husband, Owen Rodman Jenkins. Bess and Owen were married on September 6, 1952, in Bells, Texas. After their marriage, Bess attended the University of Oklahoma, receiving the Bachelor of Arts degree in May 1954, with a major in Speech and a minor in English. By the time she completed her degree, she had given birth to their daughter, Donna, in 1953, followed by their son Stephen in 1955. Bess taught English for a year in Pauls Valley, Oklahoma, and then chose to stay home with their children until the fall of 1957 when she resumed her teaching career when the family lived in Farmington, New Mexico. During the summer of 1962, Bess was awarded the Master of Education degree from the University of Oklahoma, with a major in Elementary Education and a minor in Speech. Upon moving to Norman, Oklahoma, in 1965, she worked on her certification as a reading specialist and taught elementary school until they moved to El Reno in 1970. In 1971, Bess became an instructor of Speech and Communications at El Reno Junior College (later renamed Redlands Community College). During her tenure there, she also served as Communicative Arts Division Chairperson, Director of Academic Assessment and Assistance, and Liberal Arts and Sciences Division Director. In 1975, Bess completed the requirements for the Doctor of Philosophy degree at the University of Oklahoma, with a major in Reading Education and supporting fields in Curriculum and Educational Psychology. After retiring from Redlands Community College in 1996, Bess served as a reading consultant for the education department at the El Reno Federal Correctional Institution. She also continued her life-long interest in travel. Throughout her career, Bess was active in many professional, civic, and church organizations. She served as president of numerous organizations, including the El Reno Business and Professional Women’s Club, the Uptown BPW Club, Central Oklahoma Reading Council, El Reno Junior College Faculty Association, Oklahoma Association of Community and Junior Colleges, Redlands Community College Alumni Association and Chisholm Trail Counseling Board of Directors. She received many honors including induction into the Oklahoma Community College Hall of Fame in 2019. Bess thoroughly enjoyed her forty-year career as an educator and her life-long career as a student but even more, she enjoyed her role as wife, mother and grandmother. The most important thing in her life was love: her love of God, family, friends and students. Her husband, children, grandchildren, brother, sisters, nieces, nephews and in-laws all knew that she loved them and they returned that love bountifully. She was predeceased by her mother and father; her husband of 62 years, Owen Rodman Jenkins; her sisters Mary Margaret Blunk, Frances Huffman and Tommie May; and her brother Don Gilliam. She is survived by her daughter Donna Jenkins Anderson of Oklahoma City; son Stephen Jenkins and wife Cindy of Denver; grandson Jeremy Jenkins and wife Joy of Oklahoma City; grandson Jarrod Jenkins and wife Jennifer of Dallas; granddaughter Rachel Jenkins of Ft. Collins, Colorado; sisters-in-law Frances Gilliam of Bells, Texas and Linda Taylor of Sherman, Texas; and numerous nieces, nephews, cousins and dear friends. Memorial services will be announced at a later date. In lieu of flowers, the family suggests donations to Wesley United Methodist Church or The Doctors Owen and Bess Jenkins Endowed Scholarship at Redlands Community College, 1300 Country Club Road, El Reno.

Bessie Louise Gilliam Jenkins passed from this life on January 20, 2022. She was born on September 11, 1933, in Bells, Texas, to William Neal Gilliam, a farmer, and Ola Mae Belsher Gilliam, a teacher. Growing up in rural Texas, Bess was encouraged... View Obituary & Service Information

The family of Dr. Bessie Louise Jenkins created this Life Tributes page to make it easy to share your memories.

Bessie Louise Gilliam Jenkins passed from this life on January...

Send flowers to the Jenkins family.