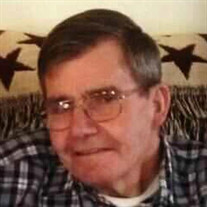 Benjamin Thomas Bennett passed away April 16, 2017 at his home, surrounded by his family. He was born May 3, 1946 in Depew, OK to William and Sarah (Holcomb) Bennett. Benjamin worked for Fleming and Walmart. He was a co-pastor at Wade Street Mission and a member of First Pentecostal Church of God. Benjamin loved to preach, give his testimony about his love for Jesus, tinker with anything outdoors, fish, and tell corny jokes. He enjoyed attending Grace family Christmas parties and Bennett Memorial Day parties. Benjamin was a wonderful husband, father, and Papa, who loved his family and especially loving on his grandchildren. He was preceded in death by his parents; brothers, Bobby Holcomb and Franklin Bennett; and sisters, Mary Grammer and Linda Towler. Survivors include his wife, Jackie Bennett of the home; children, Raina Haygood of South Haven, MI, Rusty Bennett of Edmond, Amy Elliott and husband Cyle of El Reno, and Brad Halpin and wife Barbara of El Reno; grandchildren, Chad and Jayci Halpin, Case Elliott, and Damion, Nolan, Gracie, and Josh Bennett; brother, George Bennett and wife Connie of Bristow; sisters, Lucille Lee and Barbara Naugle, both of Broken Arrow; father-in-law and mother-in-law, Rev. Eugene and Shirley Grace of Locust Grove; brothers-in-law and sisters-in-law, Randy and Donna Stamper of Chickasha, Ron and Chris Grace of Locust Grove, and Darrel and Kris Grace of Claremore; many nieces and nephews; and other relatives and a multitude of friends. Viewing will be held Monday, April 17, 2017 from 6-8pm, Tuesday, April 18, 2017 from 8-8pm, and Wednesday, April 19, 2017 from 8-12pm at Wilson Funeral Home. Funeral services will be held Wednesday, April 19, 2017 at 2:00 PM at the First Pentecostal Church of God in El Reno. Services are under the direction of Wilson Funeral Home.

Benjamin Thomas Bennett passed away April 16, 2017 at his home, surrounded by his family. He was born May 3, 1946 in Depew, OK to William and Sarah (Holcomb) Bennett. Benjamin worked for Fleming and Walmart. He was a co-pastor at Wade Street... View Obituary & Service Information

The family of Benjamin Thomas Bennett created this Life Tributes page to make it easy to share your memories.

Send flowers to the Bennett family.