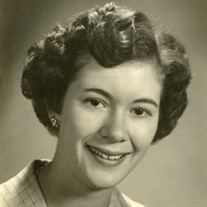 Barbara Ellen Branch entered into God’s Kingdom on March 12th, 2022, attended by family at hospice care in Oklahoma City, OK. Barbara was born on January 8th, 1934 to Myrtle Frankie (Crosley) Roberts and Lloyd Bailey Roberts in the small township of Seward, OK. She spent her younger years there, attending school in a one-room schoolhouse with her younger brother, Elmer Lee Roberts, and many cousins until her family moved to Guthrie, OK. After graduating from Guthrie High School in 1951, she attended Bauer Business School and worked as a bookkeeper and office manager for various companies throughout her life, and retired from Eaton & Associates Insurance in 1998. On June 13th, 1953, Barbara married her life-long love Clarence Samuel (Sam) Branch Jr., going on to have 5 children; Clarence Samuel Branch, III, Kevin Lee Branch, Janet Lea Branch, Bradley Allen Branch, and Kari Lyn Branch. Her family moved many times during the early years, living in Wenatchee, WA, Guthrie and El Reno, OK, Little Rock, AR, Lewisville and Ft. Worth, TX, before returning to El Reno in 1973 to make permanent roots. Barbara dedicated her life to being a fantastic and wonderful mother. She excelled at propping up members of her family and supporting them through the many passions and difficulties of their lives. Along with Sam, she cared for her daughter through cancer treatment and raised their grandson like he was their own child. Her selflessness was ever apparent with family, friends, and strangers. Barbara was a loyal servant to God, first and foremost. She loved the church and loved sharing the love and warmth of our savior, Jesus Christ, with as many people as possible. She was a founding member of Amity Baptist Church, and then New Hope Baptist Church in El Reno, OK. Barbara joins the following family in Heaven: her parents, Myrtle Roberts Dutton and Lloyd Roberts; her children, Kevin Lee Branch and Janet Lea Branch; her grandchildren, Erinn Marissa (Branch) Wiens and Austin Cole Atkinson; and many aunts, uncles and cousins. She is survived by many loving family members, including: husband, Clarence Samuel (Sam) Branch, Jr.; brother, Elmer Lee Roberts and wife, Mona Roberts; her son, Clarence Samuel (Sammy) Branch, III and wife, Monique Branch; son, Bradley Allen Branch; daughter, Kari Lyn Branch and husband, Kenneth Finnegan; granddaughter, Sarah Kathleen (Katie) Branch; grandson, Clarence Samuel (Sammy) Branch, IV and wife Sarah Branch; grandson, Bradley Allen Branch, Jr.; and five great-grandchildren. The family requests that in lieu of flowers, please send memorials, either to your favorite charity, or to one of hers. Barbara was a regular supporter of The Wounded Warrior Project, Vietnam Veterans of America, and Patriot Paws. While no services are planned at this time, a visitation will be held at Wilson Funeral Home, El Reno, OK and also at Hayes Funeral Home in Guthrie, OK in the near future when health issues allow. Please check the Wilson Funeral Home website for updates on visitation dates.

The family of Barbara Branch created this Life Tributes page to make it easy to share your memories.

Send flowers to the Branch family.