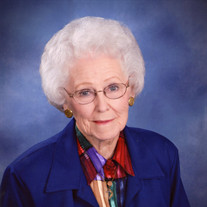 Anna Jeannette Smith Mitchell Funeral services for Jeannette Mitchell were held at 2:00 P.M. Friday, August 25, 2017 in the Wesley United Methodist Church. Rev. Richard D. Cato, officiated. Interment was in the El Reno Cemetery. Services were under the direction of Wilson Funeral Home. Jeannette Mitchell passed away on Monday, August 21, 2017 in her home with her family by her side. She was born in Fitzhugh, Pontotoc County, OK. on August 13, 1922. To Hiram Edmond and Anna Belle Saunders Smith who preceded her in death. Her husband of 45 years died in 1988. Also preceding her in death were brothers: Glenn Smith, Harold Smith, Roy Smith, sister Cherrye Lucas, sister- in – law Neva Lane, Beulah Smith, Geneva Smith, Bonnie Smith, Billie Smith; brother- in -laws; Fred Lane and John Lucas. Survivors are: daughter Mary Lane Craiger, grandson Mitchell Craiger, granddaughters: Meredith Garrett, Heather Craiger and Marcella Erhardt, great grandchildren: Desiree, Selena, Lucas Scott, Alexis, Calyn, Jeannette, and Makena, and numerous nieces and nephews and other relatives and friends. After graduation from Ada High School in 1939 and East Central University in 1942, Jeannette taught High School business subjects in Cromwell, OK. during the year 1942-43. She was married February 26, 1943 to M.A. Mitchell in Austin, TX. After completing the school year in Cromwell, she joined her husband in San Marcos where she worked 2 years at the Air Force Navigation School as secretary to the personnel officer. When her husband was transferred to Camp Grant, Illinois, she served a year as secretary to the Commanding Officer of the Base Hospital. After WWII in 1946, Jeannette and her husband moved to El Reno, where she was employed for 10 years as secretary to School Superintendent Paul R. Taylor. After an interim of 5 years, she returned to the school system as a teacher of English in El Reno High School for the next 19 years. She was a 1966 graduate of the summer NDEA Institute for Advanced Studies in English, held on campus of Kansas State University. In 1972, she served on the State Committee to revise the English curriculum for grades 9-12. Upon retirement in 1980, she was appointed as administrative consultant to edit ‘Policies, Rules and Regulations” for the El Reno Public Schools, as she had done years earlier in 1955. In retirement she served on the El Reno High School Distinguished Alumni Committee with ERPS Foundation. In 2013, she received the Oklahoma Teachers Pioneer Award in Education. In 1948 when the Central Methodist Church and the Episcopal Methodist Church merged, Jeannette was the first president of the combined Wesleyan Service Guilds for professional Women, and later organized a church circle for young mothers. In 1956, she received a WSCS Life Membership pin and in 2011 a UMS Service pin. For more than 28 years she was the 5th Sunday teacher for the Berean SS Class and served as pianist. Other organizations she enjoyed were the El Reno Study Club, which she served as president from 1995- 1997; El Reno PEO Chapter M; and the Canadian County Retired Teachers Assn, that elected her as the unit’s Most Important Member for 1998. In the 1950’s she was a member of Damrosch Music Club and the Uptown B&PW Club; also she was on the first Advisory Board of the Russell Murray Hospice. Her latest honor was presented by the El Reno Public School Foundation – The Lifetime Achievement Award in Education. She will be lovingly remembered as “Mother” to her daughter; “Nonna” to her grandchildren and great grandchildren, “a caring friend” to many; and “Mrs. Mitchell” to her former El Reno High School students. Memorials may be made to the American Cancer Society 6525 N. Meridian Suite 110 Oklahoma City, OK. 73116

The family of Anna Jeanette Mitchell created this Life Tributes page to make it easy to share your memories.

Send flowers to the Mitchell family.