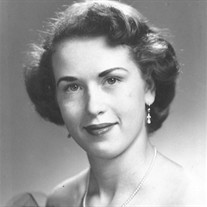 Anna Jeanette (Bynum) Hall (83), passed away peacefully in her home on October 10, 2019. She was born March 19, 1936, in Fort Smith, AR. She met the love of her life, Ray S. Hall, who she married on November 3, 1951, in Van Buren, AR. As the wife of a career soldier, she lived in many places around the world and was the loving mother of four sons, each born at a different army post. In 1967, Jean and her family moved to El Reno. She was a homemaker that loved her family very much and lived her life according to the Golden Rule. Jean had a positive influence in the lives of her family and friends. A devout Christian, Jean was an active member of the El Reno London & Macomb Church of Christ. Jean was preceded in death by her husband, Ray S. Hall; parents, Gladys L. and Roy C. Bynum; and siblings, Roy L. Bynum, Hazel L. Bynum Jones, and Freddy D. Bynum. She is survived by her four sons and their spouses, William R. and Suzanne Hall of OKC; Ronald B. and Kathy Hall of El Reno; Richard D. and Donna Hall of Yukon; Jeffrey W. and April Hall of El Reno; and numerous grandchildren & great-grandchildren. Visitation will be at Wilson Funeral Home on Tuesday, October 15, from 9am to 8pm. Funeral services for Anna Jeanette (Bynum) Hall will be at 2:00pm on Wednesday, October 16, 2019 at The Church of Christ - London & Macomb, with burial immediately after, at El Reno Cemetery.

The family of Anna J Hall created this Life Tributes page to make it easy to share your memories.

Anna Jeanette (Bynum) Hall (83), passed away peacefully in her...

Send flowers to the Hall family.