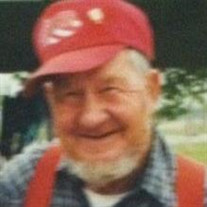 Alvin Louis Morse Funeral services for Alvin Louis Morse will be held at 10:30 A.M. Thursday, June 15, 2017 in the El Reno Cemetery Pavilion. Chaplain Duane Snavely from Mercy Hospice will officiate. Interment will be in the El Reno Cemetery with Military Honors. Visitation for Alvin will be on Tuesday and Wednesday from 8 AM to 8 PM. Services are under the direction of Wilson Funeral Home. Alvin’s first job was at 14 years old, when he ran away and joined the Ringling Brothers Barnum and Bailey Circus. He then joined the U.S. Army, and was sent to serve in the Korean Conflict, where he suffered from being bayoneted in his stomach, which caused him to be discharged and sent home. He later joined the carnival circuit in the mid 1950’s and left in 1962. He loved to go on the road to do Flea Markets and on the side of the road to sell his pin and flags. Alvin worked for the City of El Reno for many years as grounds keeper of the El Reno Cemetery. He had also had a junk yard in fair addition on O street for many years. But I think all know him as the Flag Man at 1700 S. Choctaw. Always giving out ink pens with hat pens, FLAGS INTERNATIONAL LOVER WORLDWIDE TRAVELER & PLAYBOY (LAST OF BIG SPENDERS) All know him by his car Bessie. The City of El Reno will not be the same without the Flag Man on Choctaw. He will be missed by all. He was preceded in death by his mother: Ethel Daisy Morse, Father: Thomas Morse, Brothers: Clayton Morse, Edward Morse, Calvin Morse, Hubert Sidwell, Delmar Sidwell, Cecil Sidwell, Alpha Sidwell, Sister: Maxine Holloway, Children: Step Daughter: Kathy, Sons: Alvin Lewis Morse Jr., Joey Morse, Baby Girl, April Morse. Survivors include; Son: Allan Robert Morse & wife Julie McDaniel and Granddaughter: Brittany Morse & husband Danny Verdonck, Grandson: Zac Morse and Great Grandson: Abraham Verdonck all of Colorado Springs, CO. Son: Arnie Morse & wife Vickie Morse of Fort Worth, TX. Grandson Cooper Lewis Morse. Daughter: Angy Jerig and Husband Jerry of Cheyenne, WY. Granddaughters: Julie, Jenny, Jessy, Grandsons: Jon, Cory, Jordan, 5 – Great Grandchildren. Step- Granddaughters: Vicky, Tara, Amy, Grandson Kevin and numerous great grandchildren, Granddaughter Jennifer Waling of Allen, OK. Sisters: Ethel Seher of Bethany, OK. Rosie Rodrigues of Hilo, HI. Kathy Hailey of Cody, WY. And numerous nieces and nephews and other relatives and many dear friends.

The family of Alvin Louis Morse created this Life Tributes page to make it easy to share your memories.

Send flowers to the Morse family.