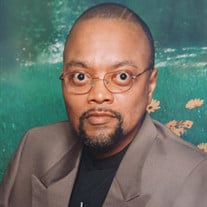 Alonzo Gene Roberson, born April 12, 1955 in Wichita, Kansas, answered the heavenly call on June 21, 2019 at 9:08 am at his home in El Reno, Oklahoma after a long battle with Muscular Dystrophy. Alonzo accepted Christ at a very young age and was baptized at the Sunrise Missionary Baptist Church currently under the leadership of Dr. Rev. Robert Proutt. He served as the Jr. Sunday School Superintendent, Jr. Deacon, and as a member of the Royal Ambassadors. Alonzo’s early education was at the Booker T. Washington Middle School, and El Reno Jr. High. He graduated in 1973 from El Reno High School.. He participated in Basketball, Track, Football, Spanish Club and the Fellowship of Christian Athletes. But most notable was he was an A student. Alonzo continued his education at the encouragement of his mother at Langston University. He excelled in many honors courses and became fluent in Spanish & Math. He pledged Alpha Phi Alpha Fraternity (Nickname ‘Heart Attack’.) He continued his education and later received a master’s degree in English. Alonzo taught English at the Capitol Hill School for 23 + years. He taught high school through his pain, walking on a cane and later resorting to using a wheel chair to get to the classroom. Many teachers at the school assisted him getting him in and out of the van, and into the building daily. When unable to drive himself, his mother continued to take hm to school to teach. During many dark days, his joy was teaching, and he surpassed many milestones along the way with his mild determination. Alonzo ‘Lonnie’ loved spending time with his family, friends, and especially his mother. He loved his church, singing and fraternity. He enjoyed watching sports with niece/nephews – Jay, KK and Jacob. Reading the Bible and reminiscing about ‘ole times’ with friends and anyone who would listen. Alonzo was preceded in death by his dad Marlon Roberson, who died when he was three months old. His grandfather Jake P. Johnson (El Reno) and great aunt Carrie Jackson (Tulsa) He leaves to cherish his memory, His Mother: Betty Jean Johnson of El Reno, OK. one Son: Deshaun Morgan of Oklahoma City, OK. 2 Sisters: Jeffrie (JJ)Hooper of Texas/Yukon, Mary (Mae Mae) Younger of El Reno, OK. 1 Nephew: Jonathan & wife Megan Reed of Union City, OK. 1 – Great Aunt: Clara Richards Bolton of Langston, OK. and 1 Aunt: Patricia & Husband AV Avington of Tulsa, OK. He also leaves behind a host of relatives, friends, and fraternity brothers. Lonnie never wanted pity and always said “Don’t Worry, I Am God’s Work” He was a soft-spoken gentleman that never raised his voice even in an argument. He was a man of peace. He loved to sing and appeared on the “Bobby Jones Gospel Show “ in Las Vegas Nevada. Alonzo left this earthly life to live a real life with his father in Heaven surrounded by the loved ones who had gone on before. Even though the disease ravaged his body, you can know that Lonnie fought the good fight through it all with courage and faith. Alonzo’s family extends its heartfelt thanks to Russell Murray Hospice Health Care professionals, Capitol Hill Staff and all the Capitol Hill School caretakers, and many others who came to out rescue with assistance in our times of need. A visitation will be held from 4-8 P.M. Friday, June 28, 2019 in the Sunrise Missionary Baptist Church. Funeral services will be held at 11:00 A.M. Saturday, June 29, 2019 in the Sunrise Missionary Baptist Church. Dr. Rev. Robert Proutt will officiate. Interment will be in the El Reno Cemetery. Services are under the direction of Wilson Funeral Home.

Alonzo Gene Roberson, born April 12, 1955 in Wichita, Kansas, answered the heavenly call on June 21, 2019 at 9:08 am at his home in El Reno, Oklahoma after a long battle with Muscular Dystrophy. Alonzo accepted Christ at a very young age and... View Obituary & Service Information

The family of Alonzo Gene Roberson created this Life Tributes page to make it easy to share your memories.

Send flowers to the Roberson family.